Last year, David Scott (aka The Kiffness) released his debut EP ‘Departures’ -under his new, self-titled solo project- to an unparalleled international and local reception. The four-track offering has reached close to 2 million streams since it’s release back in September 2019 – making it his most succesful release to date!

Scott’s new project is unlike anything you’d hear The Kiffness perform – his new style is ambient, moody and more thoughtful while contradictorily it’s totally organic and raw from the ground up with little to no conception at all. The EP was created on a whim while travelling and the results are otherworldly, offering fans a chance to discover the versatile artist that is David Scott outside from his famous and Kiff persona that South Africa and the world, have come to love.

More recently, Scott also released a remix of GoldFish x Cat Dealer’s ‘Colours & Light’ on Armada Music which is also pure fire. It goes without saying that Scott’s “plate” is never empty and his past year has been a testament to that. From taking on The SABC to creating a viral Greta Thunberg x Fat Boy Slim mash-up video that made global news and was played at stadiums around the world, to touring, keeping his social commentary on fleek and launching an entirely new musical project – Scott’s taking the world by storm, so we consider ourselves lucky that he took some time out to chat with us…

MCBN: David, it’s fantastic to catch up with you again! You’ve had a particularly exciting year in terms of music and publicity – tell us and our readers more about your top highlights for this past year.

DAVID: Thanks, guys! Yeah, 2019 was a great year. I will say that the highlight was when I mashed up Greta Thunberg’s UN speech with Fatboy Slim “Right Here Right Now”. Fat Boy Slim reposted the mashup & even performed it at his shows. The story got published in some of the worlds biggest media institutions, including Time Magazine. Some other cool stuff happened but I’m just going to leave you with this one.

MCBN: Amidst your busy schedule over the past twelve months, you quietly launched a new self-titled, solo music project and released a first EP titled ‘Departures’ which has smashed close to 2 million streams since its release in September 2019 – making it your most successful release to date – did you expect the initial release to go so well and can we expect new releases any time soon?

DAVID: It was completely unexpected, but I also knew that the EP was in good hands. I had been quietly watching KuduKudu Records (an indie Cape Town-based label) do some successful releases with bands like Grassy Spark & World of Birds, so I decided to approach Danilo to see what he could do with my EP. It’s safe to say that he delivered because the EP has outperformed anything I’ve ever released with major labels. Luckily the right people heard it & it got onto some pretty good playlists which helped it get the number of streams it has.

I’ve got some more David Scott music lined up, but it’s going to be hard to recreate what I made in the debut EP. I wrote Departures during my travels in Europe in 2018, and being indifferent worlds put me in a completely different headspace. Maybe it’s time for another overseas trip to inspire new sounds.

MCBN: Your solo project ‘David Scott’ is quite a contrast to your musical persona ‘The Kiffness’ – your new material feels more thoughtful, downtempo and intimate, from the beats to the lyrics – have you always produced music like this on the side or is it a completely new path you’re exploring? 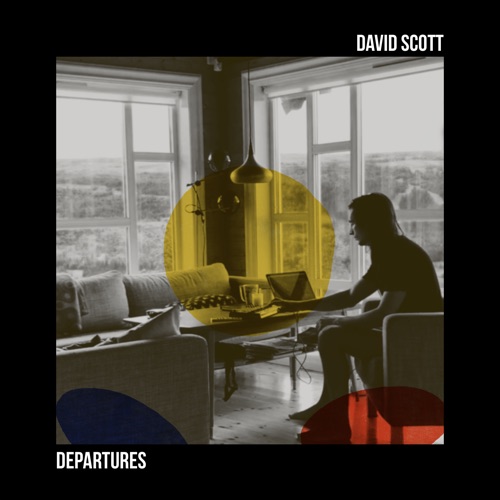 DAVID: When I make music for The Kiffness, in the back of my mind I’m always trying to make sure that the song will translate when we perform it live, whereas with the David Scott project I didn’t have that pressure & I could write stuff that was more synth-driven instead of horn/vocal-driven.

The David Scott stuff has always been there, but it’s gone untapped. I think in the past, I made a conscious decision to stay away from writing this kind of music for fear that it would fall on deaf ears or that it wouldn’t be commercially viable. South African musicians I feel always have had this pressure to make music for radio, otherwise, no one would hear it. But with the rise in Spotify & Apple Music, there’s suddenly an audience for more creative & expressive music which hadn’t been there before & I think that’s inspired a lot of musicians to be more creative.

But as I get older, I’ve started to approach music with a more Buddhist philosophy where I try not to place any importance on the outcome of my creative efforts. And that’s what happened with this project. It was a passion project & if no one heard it, I think I would’ve been ok with that. The fact that it’s done well is cool, but it was never the point.

MCBN: Is there anything/anyone specific that galvanised this creative direction? The EP was produced transcontinentally – do you feel being abroad helped inspire this new style or was it something you’ve been consciously panning for some time?

DAVID: I think as The Kiffness grew, David Scott became more stifled. Having the opportunity to get away from South Africa & just be a stranger in a new place gave me room to breathe & make something interesting. I never planned to write an EP while I was overseas, but due to the sheer amount of time we spent in airports & train stations, I decided to pass the time by just messing around on Ableton & surprised myself with the stuff I was making.

Last year my wife & I set off on an epic 3 month journey across Europe. During the layovers & train trips I wrote some music to try & express what I was feeling at the time. The EP is called “Departures” & the first song features my friends @diamondthugband. It’s called “Follow the Wind” & it’s out tomorrow x _______ will put the link in my bio & stories at midnight x

MCBN: Tell us a bit more about the concept behind the EP’s title ‘Departures’ as well as the theme’s of the four featured tracks ‘Departures’, ‘Follow The Wind’, ‘Aurora’ and ‘Nostalgia’.

“Follow the Wind” was kind of serendipitous. I made the song while my wife & I were travelling aimlessly through Europe but the song didn’t have a name yet. Chantal came up with the hook and the words pretty much sum up how I was feeling when I made the song.

“Aurora” was written while we were in Norway. We never actually saw the aurora but I had a dream about the aurora & tried to write something based on how that made me feel.

MCBN: You collaborated with Diamond Thug’s Chantal Van T on your track “Follow The Wind” – how did you two come to work together on the song and who would you most like to work with in the future?

DAVID: I’ve always wanted to work with Diamond Thug but only when I started writing this kind of music did it make sense. They rehearse at Ted’s place (the drummer) which is 100m away from my flat so it was pretty easy for them to just pop over and record between their rehearsals.

Not sure who I’d like to work with next, but I’m sure I’ll have a clearer idea once I’ve written the music.

MCBN: How would you describe the genre you’re currently producing to new and old fans?

MCBN: In terms of shows and on-stage persona, can we expect David Scott to perform live with instruments or a DJ set or both?

DAVID: I think I’m going to keep The Kiffness as my live electronic project & David Scott will just be a DJ who rocks up to shows with headphones and a USB, a prospect which I’m quite excited by. As much as I enjoy performing live, I don’t think I’ll miss carrying gear if/when I get a gig as David Scott.

MCBN: Which song off Departures was the most fun to produce and why?

DAVID: I’d say Aurora because it just happened so intrinsically. I knew exactly how I wanted the song to sound in my head & I was able to get it out quickly. The song was pretty much done in a day. Was quite sad when it was over because it happened so fast.

David Scott is a solo DJ/Producer and frontman and brain behind The Kiffness. For more information on Scott’s music and work follow the links below. Listen to his debut EP ‘Departures’ right here and his new remix of GoldFish x Cat Dealer’s ‘Colours & Light’ on Armada Music, here.